In 2006 I started my company… .. The name Coloured Goodies (coloured gift) was born. I wanted to market greeting cards with coloured people characters. People with a different skin colour now finally had to be able to identify themselves. I started designing birth cards and wedding invitations. In addition, there were gradually more and more products with which everyone could identify In 2016 I get a lot of questions ...

So often I am asked why I have suddenly become so black aware / consious? I quickly answer with “I was already aware of it for a long time because that's how I was raised, but I learn more and more about my history, etc. every day, etc.” emotions arise in me that I did not know before. In my case it is also often the case that I have to keep quiet about certain statements because you never know how this can be misinterpreted again.

Over the years I found out more and more and became more and more aware that my beautiful blackness was not being praised anywhere in society. My beautiful Dutch side was praised everywhere and this was simply not possible anymore…. This had to be done differently and I wanted to make a difference here and I shaped that in 2006.

CONSCIOUSLY .....Later in life From the moment I got several realizations I banned certain habits from my life. Various habits and moments that only made me happy in the past have now made way for new insights. I learn every day ..... But ... let it be clear that ... I have not left anyone ... I also don't boycott anyone as long as they have not harmed or hurt me. My opinion is still that EVERYONE can have their own opinion, but please let me also in my worth and know that I am still Ellen but with the wisdom that I now have a lease on. My wisdom doesn't have to be yours but it doesn't have to suffer from anger, hatred, annoyance, or what so ever .... Just RESPECT each other

In the conversations I have with people, I always clearly state that I am a PROUD child of 2 Cultures.  I love my André Hazes (* dutch singer) and yes I can dance ballroom and I like going to the camping because I got all that in my upbringing. That was my luck, but of course I also received pieces from my Surinamese side, both from my father and my mother .... My mother, for example, wanted from an early age that I could identify with toys but unfortunately there was no more those moments not to find a dark doll for her double-blooded daughter. I was 9 years old and then she came proudly smiling broadly with a dark doll. My mother told me that I did not want that doll and that it hurt my mother a lot because she thought it was soooo important that I could recognize myself in a doll instead of a doll with a white skin color and straight hair. Fortunately this all worked out later, but because of this experience it started to brew at an older age and now that I am getting older I still hear certain statements from my white mother very clearly. She has always explained to us that we are special. We are beautiful as we are (my little brother and I). The children who called us names went to lie in the sun themselves to get our tan. And so my beautiful white mama taught us that we were beautiful and that if we wanted to achieve something we could always achieve it anytime, as long as we wanted and committed to it. These have always been the educational words of both my parents.

You can do anything… if you want to

Since February 14, after having been on the market for a few years, I am now the proud owner of an incredibly cute little shop in Amsterdam north. A dream come true..

When Jetty Mathurin opened my store in a beautiful cultural way and spoke to me, she also said that I must not forget that I have written history. And yes… indeed… I became aware that I had made history. I had opened the very first black doll gift shop in the Netherlands. I was already proud, but that moment I took away a tear. Also, the idea that both of my parents would be so incredibly proud from above on the reach of something so great made me give the ugly cry. All my dreams All my intentions All my points I can now put all my criteria in my own shop. I can show what I stand for NOW. I can show what else is really needed in a multicultural society ... that C, Goodies is of added value in this society. I can make statements that everyone can identify with. I can bring change and diversity with my products

I create the wow effect !! Coloured Goodies sells products for everyone. My Dutch neighbor can now FINALLY buy a gift related to her Surinamese neighbor who has just given birth. All textile products with nice texts from various cultures, or that beautiful dark doll that is a feast for the eyes. Thanks to those who have always believed in C, Goodies, I now have my little shop… We are now open for 4 months and I can say (until now) that I have made the best choice ever. The overwhelming reactions are beyond description. People from all walks of life come by and buy something nice. Our black dolls stand with us as a core business and do it more than well. The handmade clothes that our beautiful dolls wear with nice Surinamese Antillean but also Arabic and Dutch texts are a feast for the eyes. It is a pleasure every day to see so many happy people in the store.

In 2010 or 2011 I came across several videos that made my hair straighten. The tests of Dr Kenneth B. Clark and his wife Mami Clark had a lot of impact on me because these were situations that I wanted to change with C, Goodies. It was children who got the puppet tests. 2 dolls were placed in front of them and the children could choose from the dark doll and the white doll. The incredible thing was that all dark children chose the white doll. The dark (black doll) was seen as the naughty doll. It was said to be ugly and a crook. The dark doll was depicted MORE than negative in the image of these children. It was heartbreaking to see how these children all chose the white doll and already answered that this white doll is sweet and much more beautiful and has nicer hair etc etc… .. Coloured Goodies Tests When I had expanded my business myself and started selling even more black dolls in 2013, I immersed myself in this and got to work. I wrote to several schools because I also wanted to carry out a test like this, but with children from the Netherlands of course. Unfortunately, I never managed to get a school to do a doll test. I think they were afraid of the results, i dont know. Anecdotes In any case, I have to deal with different situations in my shop every day… .. even when I was still on the market with my dolls…. I can tell a lot of beautiful anecdotes, but also less beautiful anecdotes…. At the market I often asked children which doll they liked ... I then showed 2 different dolls ... the white or the black doll and now in our shop we still do this. Unfortunately it still happens too often that the dark children choose the white doll

It's a shame because awareness starts at home, I always say. It's not like a dark kid shouldn't have a white doll, but it's also not allowed to be the only thing they know, and in my view you can't start early enough to always say like my parents did that we are beautiful with our dark skin tone and my curly hair and my fuller lips etc etc… I am A gift from the most high

I have often done the doll test without filming it, but now I want to expand it by making a documentary about it because what happened here in the store is spectacular and also a worthy piece of history I really believe in. We experience such fun things and I have often shared beautiful photo collages of happy children with their doll via social media. Writing a book and making a Colored Goodies own POP and making a beautiful educational Documentary are still objectives that I would like to achieve and in addition to this objective, many more positive messages, anecdotes, stories etc etc. will result and that is all I have with COLORED GOODIES wants to achieve ........... Thanks to you all !!! 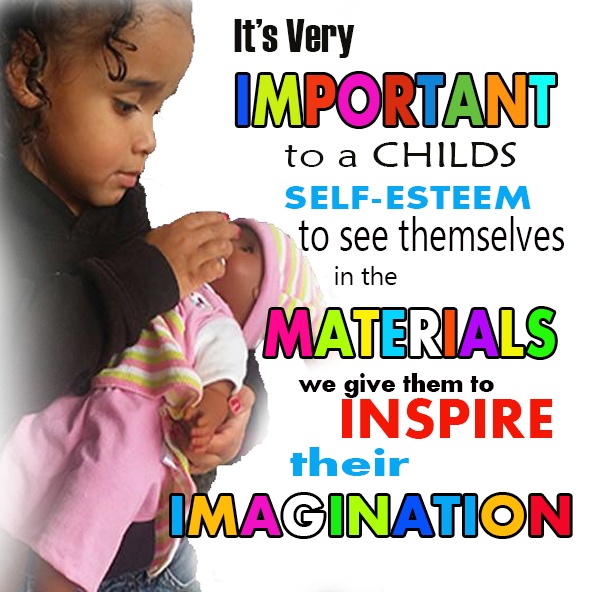 It starts at Home !!

Linken met diverse doll test all over the world 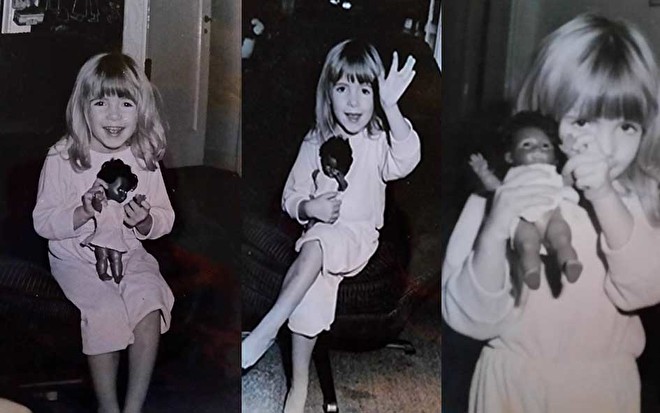 foto : My  Friend  Dunja Ullrich with her black doll in 1970